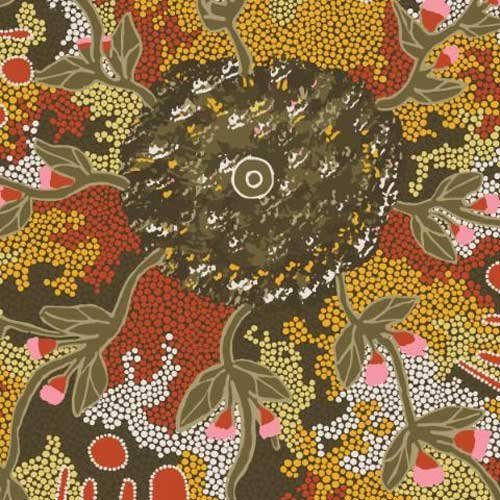 Shipping will be added upon check out.  Please note that international shipping requires a quote from us.
Australian Aboriginals are hunters and gatherers. Usually women collect bush food from the forest and men pursue wild animals for food from various places. However, none of them, men or women overdoes anything for hording. They have unwritten traditional law not to spoil the environment. They still maintain this age old social law diligently.
Audrey inherited sweet potato dreaming from her parents. In Aboriginal language Bush Potato is called Merne anatyeÂ?. Bush Potato is a large plant and there are some cracks around this large plant. They dig for Bush Potato in the cracks around the plant. Then they pull out the big root and cook it in hot earth and eat it. The large potatoes become sweet and soft after cooking and the small bush potatoes are soft.
Audrey M Napanangka being an experienced Aboriginal artist depicted the bush potatoes very vividly and skillfully. Colorful flowering bush potato plants have brightened the artwork. Between the plants women are sitting with coolamon and digging sticks. Bush Potato plants grew surrounding the waterhole represented by concentric circle